My Rants, Raves and Highlights of my life and my family

With being on goodreads I have been lax at updating my blog with my few sentence book reviews. Here is a batch of the highlights of the last 6-7 months of reading.

Cage of Souls by Adrian Tchaikovsky
This book was a really good read. It is based in the far, far future. The sun is nears the end of it’s life. Humanity has done great things, but people have stopped learning and creating and just fix what breaks until they can not fix it anymore.
The main story line is about the life of one person, he gets sent to a prison island to die for a small crime, how does he live, everyday prison life and the backstory of his life on this far future dystopia.

Starshield series by Margaret Weis
A weird take on a universe where there are pockets of different physics. Some places magic rules, some traditional physics. This is like a pirates in space. Book one focuses mostly on a crew from Earth that get create a faster than light ship that gets stuck in a magic zone on it’s maiden flight. The second book focuses on a treasure hunt of sorts to find a old device that can change the basis of reality. These books have their moments, but they do not quite make the impact that the book universe could have set up.

Shadowspell series by Shannon Mayer
A YA series that I read ahead of Aiden to get him hooked on a new book series. It is similar to Harry Potter but a bit more edgy and mid teen level. The basic back story is similar, a girl finds out magic is real and her older brother who died at school, died at a magic school and she plans to attend this school undercover, find the reason he died and uncovers a larger secret of her family.

Tales of Alvin Maker series by Orson Scott Card
So far there have been 6 books of the planned 7 in the series completed. This book world is based in the mid 1800s US but slightly different history. This world minor magic exists, people have small skills or ‘knacks’. Some can see if a person is a good or bad person. Some can see their history. Some just have a knack to fit wood together easily, or find a well.
The main story is based around the 7th son, of a 7th son. This person gets lots of knacks and his life is trying to be extinguished on all sides. He slowly grows and learns about his knacks and how to use them for good and not evil.
One interesting feature of this series is how it weaves large historical events into the story. Battle of the Alamo, why William Henry Harrison died shortly after taking office, etc.
I enjoy Orson Scott Cards series, just try to ignore some of his blatant lifestyle ideals that sometimes comes into his works, but in this series it is really not present until the last few books.

Jig the Goblin series by Jim C. Hines
Humorous and light hearted series with a goblin as the main character. The first book brings the reader to understand the plight of the goblins, how they are always being attacked by questors or other creatures and how they are just trying to survive. One particular goblin is a bit brighter than the others and finds an old forgotten god to pray to that takes pity on him and grants him cleric type healing powers. A fun read.

Getting Off by Jill Emerson
An attractive girl grows up using her body to get what she wants. She ends up wanting to kill anyone who has used her. This story tracks her life and how she has a list of anyone that has had sex with her and her desire to track them down to end their life. Can she find everyone and take care of them, does she get caught and how?

Janitors of the Post-Apocalypse series by Jim C. Hines
Janitors in space! Through a weird series of events Humans become the scariest monsters in the universe. They are used as savage military agents in a battle between races. One craft is decimated and only the janitors are left to take control of the ship. How can this rag tag crew of sanitation engineers not only continue the battle but can they learn why humans are so feared in the universe?

Well that should cover the last 6-7 months of reading.. Let me know what series you have enjoyed most. 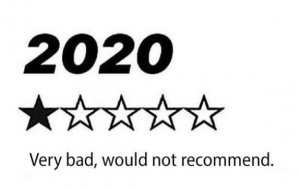 This depicts 2020 well; it sure has been a whirlwind of emotions as we all reacted to changes outside of our control. But our family has come out on the other side with some great memories and thankful moments.

Brandon (18) graduated high school – moving on to upper education at Mankato State. He is in the Aviation program and has his first semester of flying lessons under his belt. We could not be more proud of him!

Aiden (14) moved up to high school level – and has had an unusual start to his next four years; with hybrid and now full distance learning. He has done a great job navigating the new normal, keeping himself connected to his teachers and his friends. He keeps upbeat about the situation.

Danith and I have been fortunate to be able to completely work from home since mid-March. Luckily, the house is arranged to allow for us to work in separate spaces. I have put in over 500 miles of running this year. Danith continues to find creative outlets through quilting and recently joined a book club